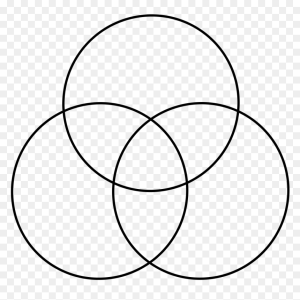 We share the goal of creating a workplace where each person can bring their whole selves to work, but what are the best practices for creating this safe workplace? As psychologists, and as scientists, we have some tools at our disposal to discern which approaches work, and which lead us astray. We’ve learned that essentialist representation of gender and national identity, but not race, is revealed by cognitive demand (Siddiqui & Rutherford, 2021) and that religious labels impact the perception of Christian and Muslim faces (Foglia, Mueller & Rutherford, 2021). Future research may lead us on a path of continuous improvement.

The Psychology of Peace

We know that adults have dedicated cognitive processes that allow for altruism and reasoning about moral judgment. Psychological processes that support moral behavior are part of a suite of social cognitive adaptations that allow us to be a large-group social species, but these processes have only recently been explored empirically. We are exploring developing psychological machinery underlying prosocial and moral behaviour. Maheen Shakil is exploring whether our human psychology allows us to expand our definition of our ingroup, and thus extend our moral concern to a bigger circle. The key to the puzzle is understanding the psychology that motivates aggressive and cooperative decisions.

The perception and representation of social categories is fundamental to how we are with each other, and the psychology underlying these perceptions is of great interest in our lab. We’ve learned that essentialist representation of gender and national identity, but not race, is revealed by cognitive demand (Siddiqui & Rutherford, 2021). Canadian children have an essentialist but developing concept of national identity, as do American children. (Siddiqui, Cimpian & Rutherford, 2020). We are currently testing whether people have an essentialist perspective of substance addiction.

The Perception of Animacy and Biological Motion

How do people know whether an object is alive? We study the motion cues of animacy, asking what cues people use to perceive that something is animate. We have found that speed matters, but perceived speed matters more (Szego & Rutherford, 2007; 2008). We use point-light walker stimuli to test whether people with autism can perceive simple actions based on these rudimentary cues to biological motion cues (Rutherford & Troje, 2011; Rutherford, Trivedi, Bennett & Sekuler, in prep). A recent meta-analysis revealed that in autism spectrum study samples, biological motion perception correlates with IQ, suggesting the recruitment of broader cognitive processes (Foglia, Siddiqui, Khan, Liang & Rutherford, 2021).

The Perception of Emotional Facial Expressions 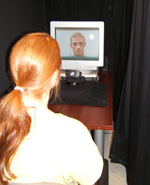 We take an evolutionary and functional approach to the study of emotion perception. The relationship between the emotion categories is predicted by their function (Rutherford and Chattha, 2005). Recent work has shown that various methods, including the Visual Expectation Paradigm, can be used to reveal stable and reliable category boundaries (Cheal & Rutherford, 2015). We now know that young children use a more rule-based strategy for emotion perception, but develop a template-based strategy as adolescents (Foglia, Zhang, Walsh & Rutherford, 2021).

The development of autistic characteristics, and the broader phenotype

One prominent question in autism research is what are the very early signs of autism. We know that early diagnosis and early treatment lead to improved prognosis. In an ongoing, longitudinal project, using eye tracking technology, we are recruiting and testing very young siblings of children with autism in order to see whether early social perception can be used to predict a later diagnosis of autism. We observe these infants who are at risk for autism with the aim of detecting the very earliest correlates of a later autism diagnosis and social cognitive development. This has obvious clinical applications as well as having the potential to answer important theoretical questions. We’ve learned that infants developing with ASD show a unique developmental pattern of face scanning (Rutherford, Walsh & Lee, 2015), and that Social Attention is increasingly atypical across the first six months in the broader autism phenotype (Rutherford, 2013). 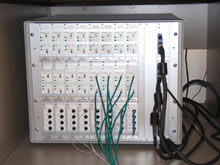 Using Diffuse Optical Tomography, we can measure brain activity in adults and children. We use this to measure the brain’s reaction to social and emotional stimuli. This can tell us what parts of the brain are responsive in those with and without autism, so that we can compare these two groups. We can also use this technology to test whether different people’s brains categorize emotions the same way, and respond similarly to emotionally provocative scenarios.